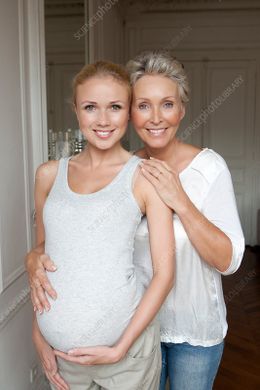 Still in her late teens, and in school, my daughter knew she wasn‘t ready to be a mom.  And her on-again, off-again boyfriend had no plan to take on a parenting role.  For our daughter, terminating a pregnancy was not an option.  So, where do we go from here….?

As we got over the initial shock of the news, we began to think further about how we as prospective grandparents could best help our daughter and this, our first grandchild.  First was to get prenatal care lined up.  Our family doctor was a great help in getting us connected to a wonderful obstetrician and arranging for an ultrasound to determine the likely due date.  Our daughter invited me to attend the ultrasound appointment with her.  The moment we saw the screen showing the developing baby, we both were in tears.  My heart swelled and almost burst, thinking about this burgeoning miracle of life.  I thought to myself, this little one deserves the best.  “Possibly a boy”, the technician said, “but we can’t always be sure”. We soon learned that the pregnancy was already four months on….so five more months until this baby will be born.

Our daughter welcomed our involvement in discussing the plans for her baby.  I was pleased that she was open to these discussions.  My husband and I felt that our age (already in our 60s) and life circumstances were such that we were not in a position to raise another child.  However, we were willing to help with caring for him or her.  We wanted her to know what she could expect from us.

It was our daughter who first started talking about adoption. Through her own channels, she had learned about open adoption and, with parenting seeming an overwhelming thought, she felt being able to choose a couple who really wanted to be parents, to continue to have a relationship with her child and the new parents as he or she grew up, and to know how things were going were very important to her.   I felt that adoption would only be an option if there was a way to keep in touch, have a relationship with this child, and know how our grandchild was doing.  We wanted our grandchild to know that we love him or her.  There was no way that a traditional, closed adoption would be acceptable because that represented such an enormous loss.  And there was no way we wanted to lose our grandchild or have him or her feel abandoned by us.  What kept coming to my mind was one of my neighbours, adopted as an infant, who had told me about how she worried, wondered, and longed to know about their birth parents as she was growing up.  So, I was thinking that a closed adoption would mean a great loss and that was not what we wanted to inflict on our grandchild.

To learn more about the adoption option, especially open adoption, we sought the services of an experienced adoption Licensee who could tell us more about open adoption and how it works.  We – our daughter included — wanted a professional willing to arrange an adoption where we as grandparents could be included in any openness arrangement.  We were told this was not the usual practice, but the Licensee fully supported what we were asking for and would check with waiting couples to find ones who were open to this type of open adoption.

Meanwhile, as the pregnancy progressed, my daughter and I attended prenatal classes together.  We went on the hospital tour together.  I wanted to make sure that we did all we could for our daughter to have a healthy pregnancy, to be prepared for the birth and to make sure that she got all the information she needed to help her with the decision of parenting or adoption.  She kept saying that she thought that she wanted to proceed with adoption.  As part of the counselling for adoption, her counsellor explored both options, parenting and adoption.  I was glad that she had someone she could talk to about this important decision.  It was ultimately her decision and I wanted to make sure that she did not feel pressure from us.  We outlined the specifics of what we would do to support her as a parent.  And we also indicated that we would support an adoption plan that included us in the openness.  When she was seven months pregnant, she insisted that she wanted to choose an adoptive family for her baby and she wanted us to be involved.  The Licensee indicated that she had found some couples who wanted to be presented for our consideration.  The next task was choosing a family.

Watch for Part 2:  Choosing and Meeting the Family