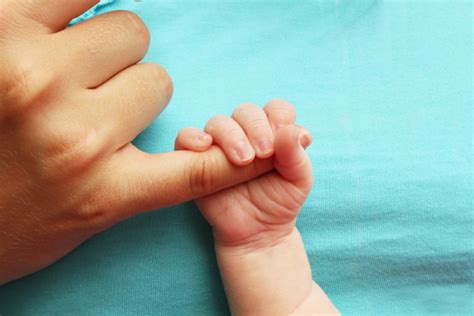 It was almost a week past the due date when the first signs of labour started.  At the last prenatal visit, the doctor noted that the baby was in breach position but would probably turn prior to the birth.  Well, that didn’t happen. This baby stubbornly held the breach position so, after many hours of unproductive labour, a Caesarean section with epidural anesthesia became the procedure of choice.

I felt incredibly honoured to be at the birth and to be with my daughter throughout the hospital stay.  She had decided that she did not want anyone else at the birth.  By the time the decision to do a C-section came, my daughter, already exhausted, was very relieved.

“It’s a boy! A healthy, baby boy!”  It’s hard to describe how it felt to hear this.  The miracle of birth brings joy and wonder, no matter what.   As the doctor did the stitches, the baby was weighed, cleaned and swaddled and placed in a small bassinet next to my daughter.  She wasn’t able to hold him as yet, but, when she reached her hand down to touch him in the bassinet his little fingers wrapped around one of her fingers.  They kept this position while the doctor completed the post op procedures and then he was placed in her arms.

We called the adopting parents to give them the news that it was a boy and to invite them to come to the hospital.   They were so excited, and we couldn’t wait for them to see this little guy.

The combination of surgery and a bad reaction to the anesthesia and pain meds kept my daughter in hospital for 3 more days.  Although it was hard to see my daughter having to cope with these additional challenges, I felt that having more time with our new grandson was a bonus.  Rooming in was arranged so we could be with him, and I was given a small cot that allowed me to stay over with my daughter to help care for him.

Our grandson’s biological father visited and a final decision on a name was made.  The birth parent worker came to review everything with my daughter to determine if she still wanted to proceed with the placement.  Brave soul that she is, adoption was still her plan.  I kept wondering how we were going to manage saying good bye to this precious little boy.

The night before discharge, my daughter and I both wanted to stay awake to enjoy every minute of our last night with him.  We watched him as he slept serenely, waking only for feeding and changing every 3 hours. We both wondered how we would get through the next day.

The Licensee, birth parent counsellor, adopting parents all arrived the next morning and all the last bits of paperwork were completed for the placement.  We all spent time together, talking and taking photos.  The adopting parents left the hospital first with the baby. We were all in tears as we said goodbye and watched them leave.  There are no words to describe this moment. One thing I was comforted by was the fact that we had come to know the new parents enough prior to this to feel confident that they  were sincere and committed to maintaining an extended family relationship with us.  Without that, I couldn’t imagine being able to cope with what was happening.

As we were packing up to leave the hospital ourselves, the adopting father re-appeared, looking for our daughter. He hugged her and told her he wanted to be sure that she was ok.  My daughter was very touched by his concern and later said to me “that’s the kind of Dad I want for my son”.

Leaving the hospital, I felt tremendous loss and emptiness and was sure that my daughter felt the same but with greater intensity.  I knew that there were still more steps ahead for my daughter to take….signing the consent to adoption, and then the 21 day period in which she could change her mind.

Our feelings of loss and grief would have been overwhelming, were it not for the prospect of an open relationship where we would have regular visits with the adoptive family.  Knowing that my daughter could be part of her son’s life, and that we were not completely losing our grandson, gave us hope.